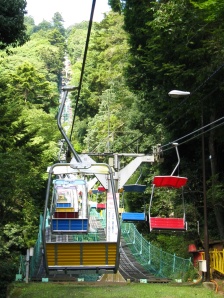 Earlier this week, I convinced Serj (Bryan’s apprentice of sorts) to climb Mount Takao with me. Takao-san is a popular hike, as it is close to Tokyo and really accessible. You just take the train to the nearby station of Takaosanguchi, and follow the signs to the trail. We cheated a bit at the start and took the lift up the steepest part (as does nearly everyone, though most people opt for the cable car instead of open air suspension).

Next up: monkey park!!! Over fifty 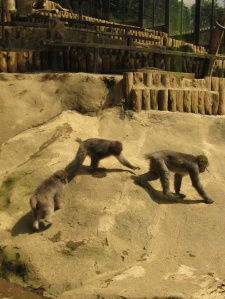 monkeys live at the park; the youngest one was born in May. (The ones that live near Bryan’s probably descended from monkeys that escaped the park after a weather event.) I have been driving everyone at the house crazy with my desire to see monkeys while walking the dogs, so this was a good opportunity to check them off the list and stop spending my dog walks looking up in the trees.

The mountain temple (Buddhist) is

devoted to Tengu, a long-nosed red goblin said to reside in the mountains and have supernatural powers. His giant-nosed image is everywhere on the climb and on all the mementos for sale. 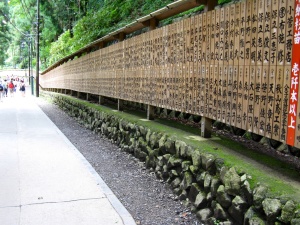 There are multiple station-stops along the way, with vending machine drinks, a snack stand or two, and souvenirs for sale. (I bought a Tengu pin from a vending machine). If this is Japanese hiking, we should all be doing it, because it involves a 5 minute stroll, a small set of stairs, a stop for snacks and drinks, and repeat for every stop until you reach the summit.

At the top (599 meters/1965 feet), we were treated to a view over Tokyo (with Mt. Fuji hidden in the clouds) and had lunch at the noodle shop. But we had heard a rumor that we could actually walk all the way back to Bryan’s from Mount Takao.  And it was only 12:30, and we had barely done any hiking… Part 1 of 2.