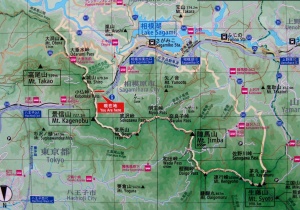 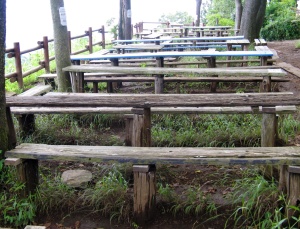 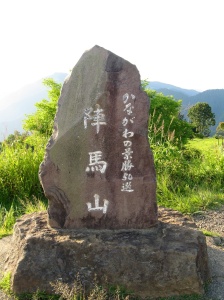 From the top of Mt. Takao, Serj and I decided–on the spot, over lunch–to walk home to Bryan’s. This was either going to be the best idea ever, or a long walk to nowhere! But after looking at the map in the Takao visitor center for a bit, I felt confident in our skills. Civilization would never be far away, as there were towns along either side of the ridge-line we’d be walking. The weather was perfect:  sunny and clear.

We headed out on the well-marked trail (at least, well-marked in Japanese) and started home. The trail led us to the top of Mt. Shiro, along the Kobotoke Pass, to the summit of Mt. Kagenobu and Mt. Dosyo, through the Sokozawa Pass, the Myoo Pass, the Narako Pass, and then to Mt. Jinba. Each summit had a lovely rest area with a noodle shop, though only the first two were open because it was a weekday. When we stopped, Serj said it was the best soup he’d ever had. (I wouldn’t know–I had barbeque Cheetos. What can I say?)

We met hikers along the way. (Konnichiwa!–Good day!) Nearly every one was dressed in full hiking gear:  backpack with camelpak, hiking poles, full length pants, hiking boots and an outdoorsy shirt. Were we hiking Mt. Fuji? They take their hiking seriously here, like everything else.

Meanwhile, I was dressed in polka dot shorts and running shoes and was carrying a coke and a candy bar in case of emergency. I realized I was taking the hike a bit casually when I almost slipped while unwrapping a chocolate bar on an uphill slope. Did I mention it had rained throughout the night? And that the trail was:  up a path of tree roots, down a path cut into the slope, up a path of stepping stones, down a slippery path,… Well, you get the idea.

After 4+ hours (ahead of schedule I might add), we reached Jinba-san. At 855 meters, it was our highest peak and the most deserted. We were treated to a view of white horse statue. (I think Jinba means military camp + horse). From there, we took the Wada Pass and after walking straight down the mountain, we arrived down on the main road which runs by Bryan’s. By the end of the day, his extremely steep driveway seemed like nothing we couldn’t handle. We’d just walked over 22 kilometers–a half-marathon on a whim. Totally worth it!